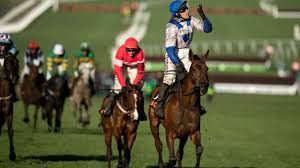 The jumps season is really starting to ramp up with 3 good meetings at Ascot, Wetherby and Down Royal today. Some top stables have yet to hit top form yet – such as Colin Tizzard – so be selective with which yards you back at the moment.

I have been on course at least twice to see Nicky Henderson’s 6 year old run some very promising races, including at Cheltenham last year in November when he finished 2nd in a Class 2 Handicap over 2m 5f on soft ground.

He has also won at this track, which is a big positive. He has the stable’s no1 jockey Nico De Boinville onboard today, and the pair have a good relationship. Nicky Henderson has had a good start to the season, and I think this gelding can enhance that further today.

Trainer Anthony Honeyball rates this 6 year old very highly, and he has shown that by aiming him at some top races. He won his bumper at Fontwell in impressive style by 18 lengths, and then he won a maiden hurdle at Plumpton by 11 lengths.

Today will show how good he is because he is running in a Class 1 Handicap against some other good horses. I like Sebastopol as well – who Tom Lacey also rates highly – but if Anthony Honeyball’s opinion of this 6 year old is correct, he will win this race.

This 5 year old has run 4 times for Brian Ellison in bumpers, and he has progressed with each run winning his last 2 at the end of last season.

He makes his hurdling debut here today, and his trainer thinks he could be 1 of his best novice hurdlers this season. The stable have a reputation for being a gambling yard, so keep an eye on his price in the market, especially close to the off time.

Dan Skelton is another trainer that has had a good start to the season, and he runs this consistent 8 year old mare. She was the beneficiary of the unfortunate last flight fall of Benie Des Dieux in the Mares’ Hurdle at the Cheltenham Festival in 2019, but she is a very good horse in her own right.

She rarely runs a bad race, and the brother combination of Dan and Harry Skelton have a good record at this track. I think that she is the best horse in this race, and she will show her class today.

Gordon Elliott and Cheveley Park Stud run a horse in the bumper at Down Royal today (4.10) called Sir Gerhard, and there is a lot of hype behind this 5 year old. He isn’t a backable price today @ 2/5, but I would recommend you put this gelding in to your trackers because he could be the next Envoi Allen